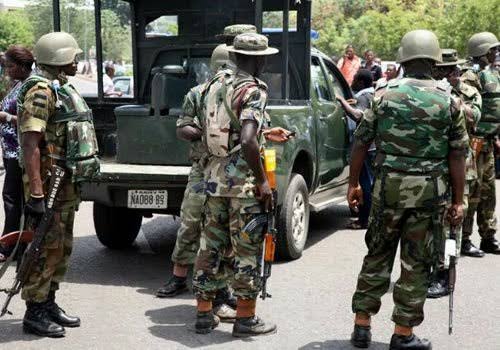 The bent by the Army led Nigerian Military on caring out its lives, liberties and democracy endangering country-wide operation positive identification, despite its widest rejection by Nigerians from all walks of life is nothing short of experimentation of a martial music and imposition of a military state of emergency across the country by other means. Constitutionally speaking, the Army and rest of the country’s military have usurped the powers of Mr. President as “Commander-in-Chief of the Armed Forces” under democratic setting and brutally undermined Section 1 (2) of the 1999 Constitution. That is to say that the widely rejected Army operation is likened to Nigeria being taken control of by group of ranking khaki boys outside the provisions of the 1999 Constitution


The above was the position of SBCHROs; a coalition of 24 human rights and democracy organizations based in Southeast Nigeria in a joint statement issued today in Enugu, Eastern Nigeria and signed on behalf of the Coalition by Dr. Jerry Chidozie Chukwuokoro, Comrade Aloysius Attah, Chidinma Udegbunam, Esq., Obianuju Igboeli, Esq., Emeka Umeagbalasi and Comrade Peter Onyegiri; all principal officers of the Coalition.

Army Is Now Subversive To Civil Authorities & A Serious Threat To Nigerian Democracy
The Army led Nigerian Military has become subversive to the civil authorities and a serious threat to Nigerian democracy.  This is also a clear violation of Section 217 (2) (c) of the Constitution. Instead of the Army ‘aiding the civil authorities”, it now subverts civil authorities. The present composition of the Army and other branches of the Armed Forces is also sickening and a brutal breach of Section 217 (3) of the Constitution which mandates same to be composed along sectional balancing.

‘Cork & Shoot’ Contradictory Reasons Given For The Operation
We have read the reasons given by the Army and the Defense Headquarters and found them to be nothing short of ‘cork and shoot’ and monumentally contradictory. The Defense Headquarters said the Operation Positive Identification was “meant or targeted at cross border bandits” while Army said it was meant to “catch or fight” “kidnappers, armed robbers, bandits, cow rustlers, arsonists, cultists, ethnic militias or militants and other violent criminals and crimes threatening national security”. The same Army to somersaulted, saying the operation was meant to catch “fleeing Boko Haram insurgents who are no longer in their enclaves” and that ‘it is based on intelligence gathered”. We do hope that it is not a ploy to export political Boko Haram terrorists to other parts of the country particularly in the Southeast and the South-south?

Questions The Army Could Not Answer:
As expertly formulated by Intersociety, the Nigerian Army was unable to provide professional and satisfactory answers to the following questions:
Does it mean that Nigerians or citizens caught without Army’s imposed valid means of identification such as ‘National Identity Card’, ‘Voter’s Registration Card’, ‘Driver’s License’ or ‘International Passport’, or “other valid official identification”; including the aging, the under-age and the poor, etc automatically become or be treated extra judicially as “kidnappers”, “armed robbers”, “bandits”, “arsonists”, “cultists”, “IPOB terrorists”, “419s” or “cyber criminals”, “murderers”, “rapists”, “oil thieves”, and “road traffic offenders”?

Considering the fact that over 70% of Federal Roads in old Eastern Nigeria or Southeast and South-south are in acute deplorable state, is it not correct to say that the so called “operation positive identification” is a deliberately designed punishment or roadway torture package meant to further keep road users or travelers for several hours on cue or make them suffer from artificially created chronic traffic jams?

Is it not correct to say that it is a height of military or service blunder for Nigerian Army in this computer or ICT age to still hold that its own version of ‘street criminals’ including “kidnappers”, “armed robbers”, “bandits”, “arsonists”, “cultists”, “IPOB terrorists”, “419s” or “cyber criminals”, “murderers”, “rapists”, “oil thieves” and “road traffic offenders” do not possess and can never possess “National Identity Card’, ‘Voter’s Registration Card’, ‘Driver’s License’ or ‘International Passport’, or other valid official identification”?

Is the Nigerian Army not professionally aware; even going by ordinary common-sense that violent criminals and non-physically violent others (i.e. cyber criminals including advance fee fraudsters) are like other citizens in Nigeria with easy access to the named identification items if they so wish?

Where in the history of Nigeria had the Nigerian Army come across citizens in conflict with the street criminal law particularly the violent criminals openly or publicly wearing signposts of their criminalities on peaceful or quiet roadways or in the streets?

Where in history has it been heard or recorded that violent criminals are caught on quiet and peaceful roadway routes through paper or plastic identifications?

Is this latest “national defense” policy of the Nigerian Army not an express indication of the Army of the Yore operating in the 21st Century technology ruled world and Nigeria as “the Nigerian Army”?

What is the difference between the latest policy of the Nigerian Army and born-before-computer or BBC soldiering?

Why is it that when other armies are busy leading their countries to the moon and mental and ICT driven securitization, the Nigerian Army is busy taking Nigeria and Nigerians back into the cave?

The Intersociety questions said it all concerning the motives and targets of the widely condemned and rejected operations. We and the rest of Nigerians and the world are watching and monitoring.
Posted by PublicInformationProjects at 04:59